Eric Carle was born on June 25, 1929, in Syracuse, New York. His parents, Erich and Johanna, were childhood sweethearts who had emigrated from Germany a few years earlier. Despite the Great Depression, Eric’s father was employed as a spray painter for the Easy Washer Company in Syracuse. His mother worked as a maid for a wealthy family.

Carle attributed his lifelong love of nature to time spent walking through the woods with his father. The family enjoyed weekends camping, fishing, and boating in the nearby Finger Lakes region of upstate New York.

Life in Syracuse was happy for Carle. He began school in 1935 and years later fondly recalled a sun-filled classroom with large sheets of paper and colorful paints. His kindergarten teacher, Miss Frickey, encouraged Carle’s artistic abilities and told his mother to do so as well. 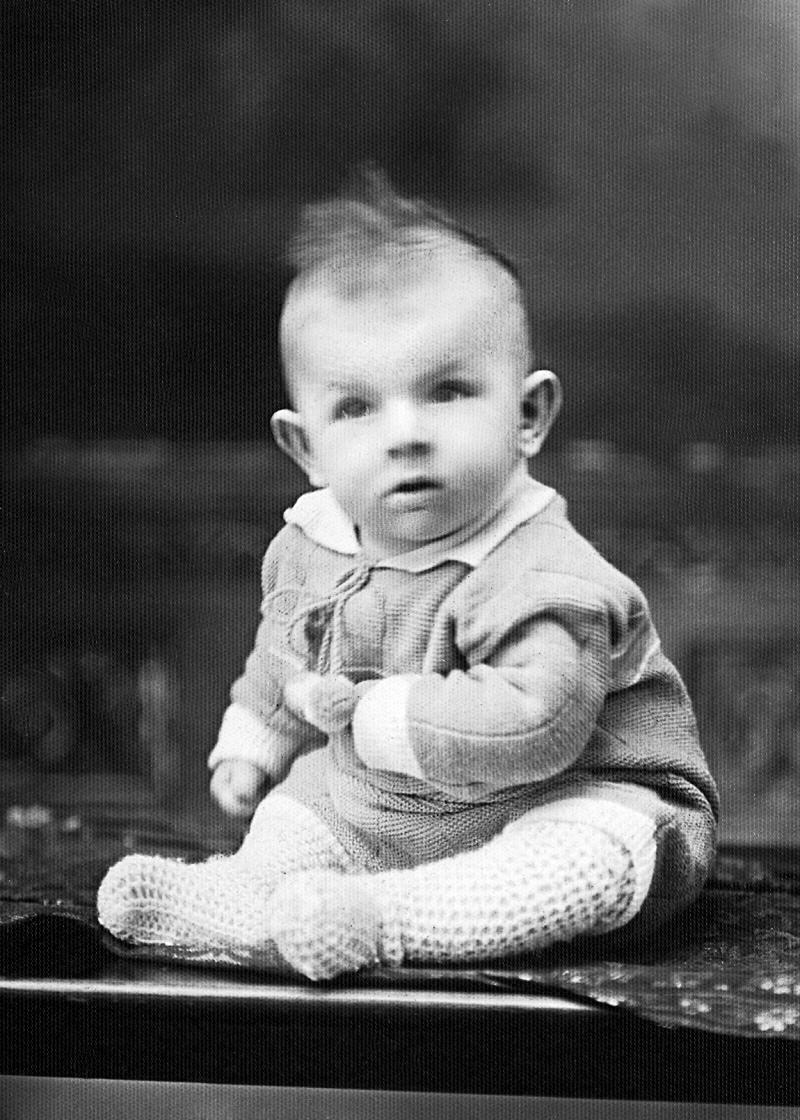 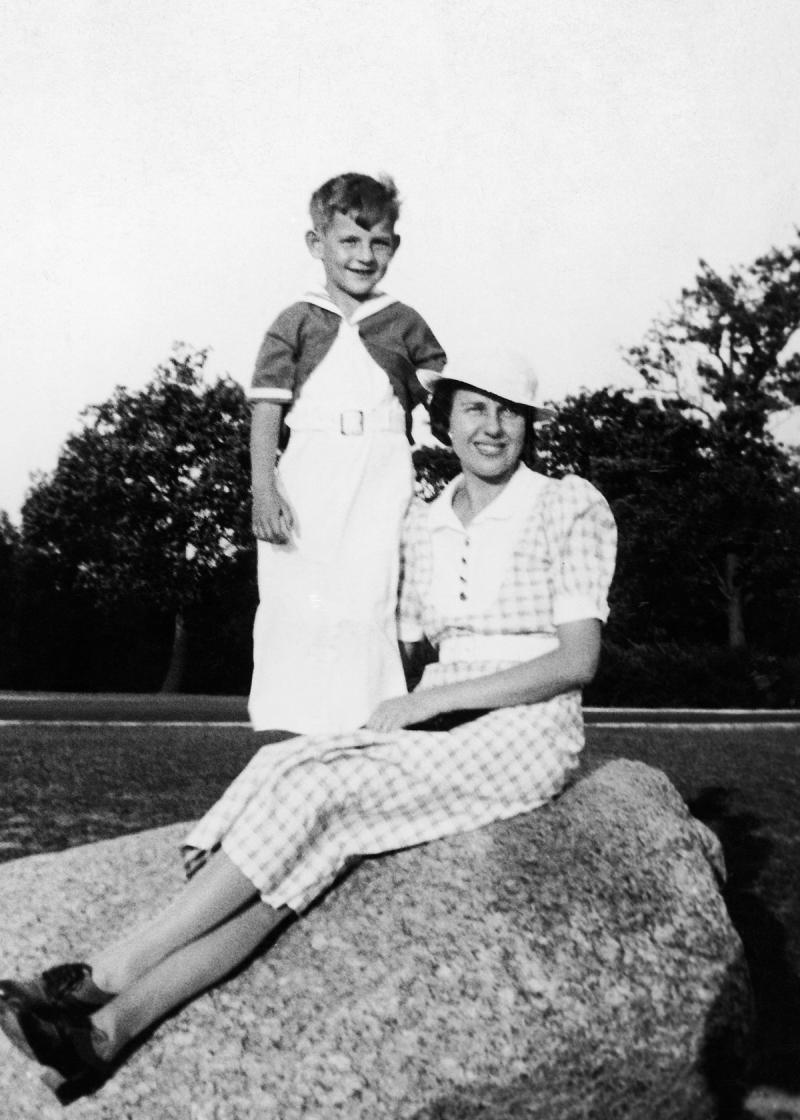 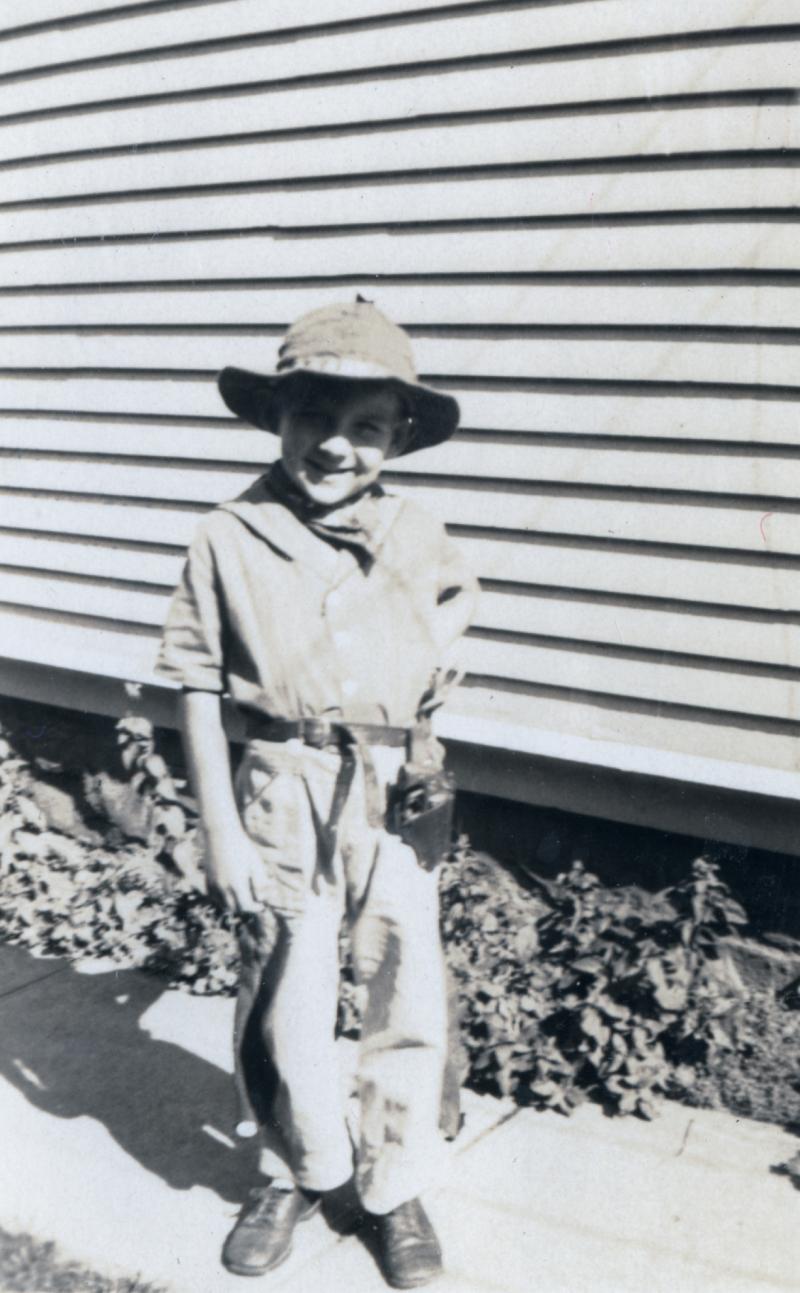 In 1934, Carle’s paternal grandmother visited the family in Syracuse and implored them to move back to Germany. Three of her five children had come to the United States in search of a better life, and she missed them. Carle’s mother was homesick, so his father reluctantly gave in, a decision they would deeply regret. They boarded a ship when Eric was six years old.

Carle attended first grade in Stuttgart (he is pictured third row from the front, second on right, wearing traditional German lederhosen). His school was drastically different from the one in Syracuse. He recalled “small rooms, narrow windows, hard pencils, small sheets of paper, and a stern warning not to make mistakes.”’ Every day, Carle asked his mother when they would return to America. 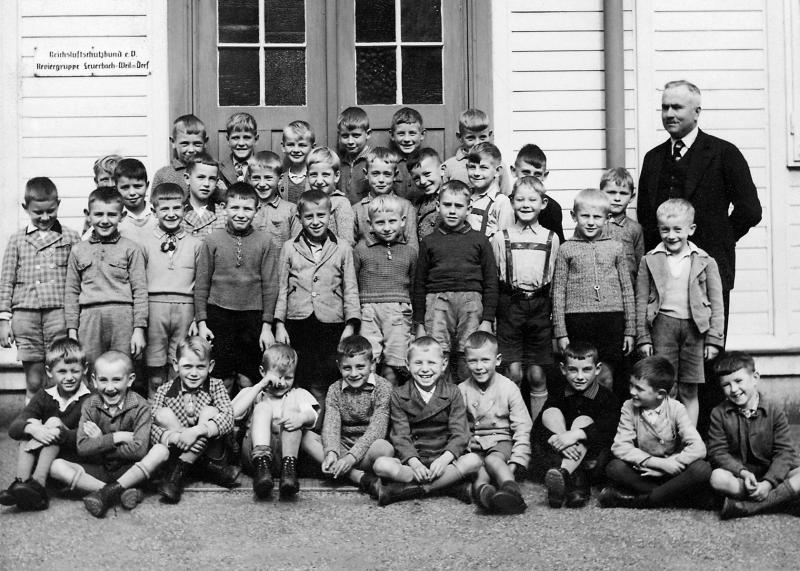 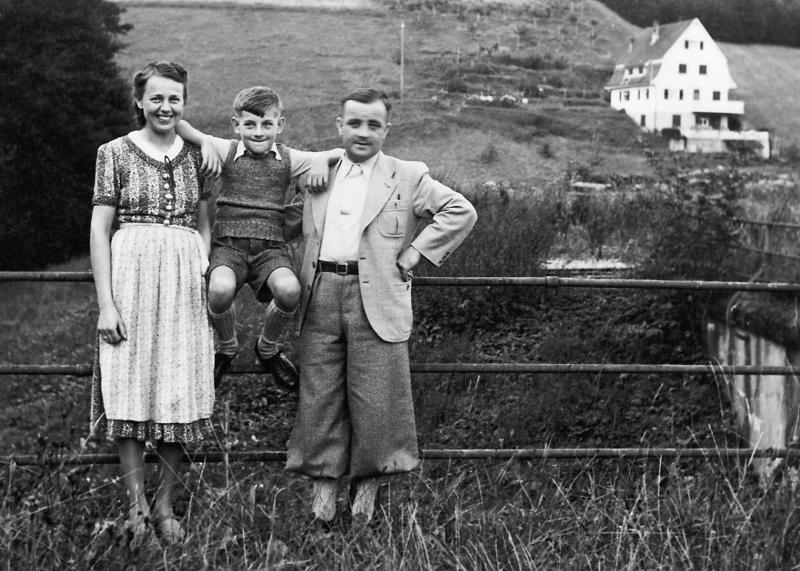 Eric Carle and his parents, Johanna and Erich. Image courtesy of The Eric Carle Museum of Picture Book Art.

Eric Carle and his parents, Johanna and Erich. Image courtesy of The Eric Carle Museum of Picture Book Art. 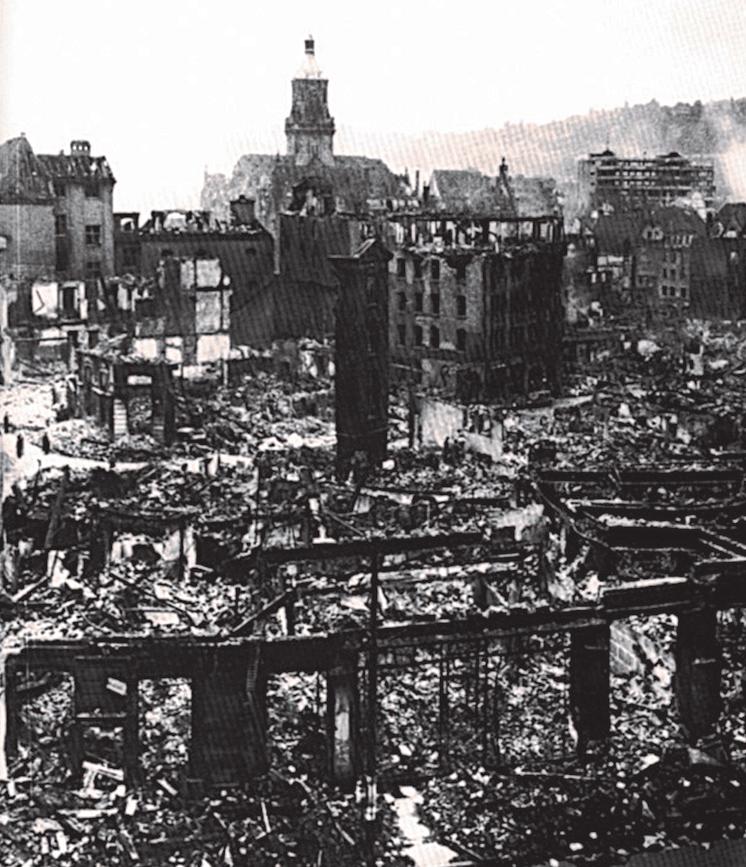 While visiting the Black Forest in 1939, the family learned that Germany had invaded Poland. Alarmed, they hurried home. World War II had begun. Within weeks, Carle’s father was conscripted into the Wehrmacht, the German army. He was later captured in Russia and held prisoner. He did not return until several years after the war ended.

Because Stuttgart was a center for industry, railroads, and the military, it became one of the key targets for the Allies in the war against the Nazis. Carle’s schooling was fragmented. Twice he and other children from Stuttgart were evacuated to the countryside.

Art class with Herr Krauss was the highlight of Carle’s schooling. Krauss invited Carle to his home to secretly show him a box of banned art—what the Nazis called “degenerate” art—by masters like Pablo Picasso, Paul Klee, and Wassily Kandinsky. “Their strange beauty almost blinded me,” Carle remembered. “At great personal risk, my art teacher quietly defied the regime, so that a 12-year-old boy who loved colors, shapes, and lines would be able to experience the wonder of an art he had until then not even known existed.”

Herr Krass, Eric’s art class teacher. Image courtesy of The Eric Carle Museum of Picture Book Art.
After the war, Carle enrolled in the Akademie der Bildenden Kunste in Stuttgart, where he studied commercial art under the guidance of Professor Ernst Schneidler. “Those four years were the most inspiring and exciting years of my artistic schooling,” said Carle.

Carle designed this theater poster while working as a graphic designer in Stuttgart. Its simplicity and strong colors are elements he would carry over into his children’s books.

Carle was 23 years old when he finally returned to the U.S. He arrived in New York City in 1952 with $40 in his pocket. With help from art director Leo Lionni, whose work Carle had admired in Fortune magazine, he secured a job in the promotion department of The New York Times.

By the early 1960s, Carle was back in New York City and working as an art director for an agency specializing in pharmaceutical advertising. His love of nature, bright colors, and his signature collage technique—all characteristics of his children’s picture books—are evident in his early professional work. 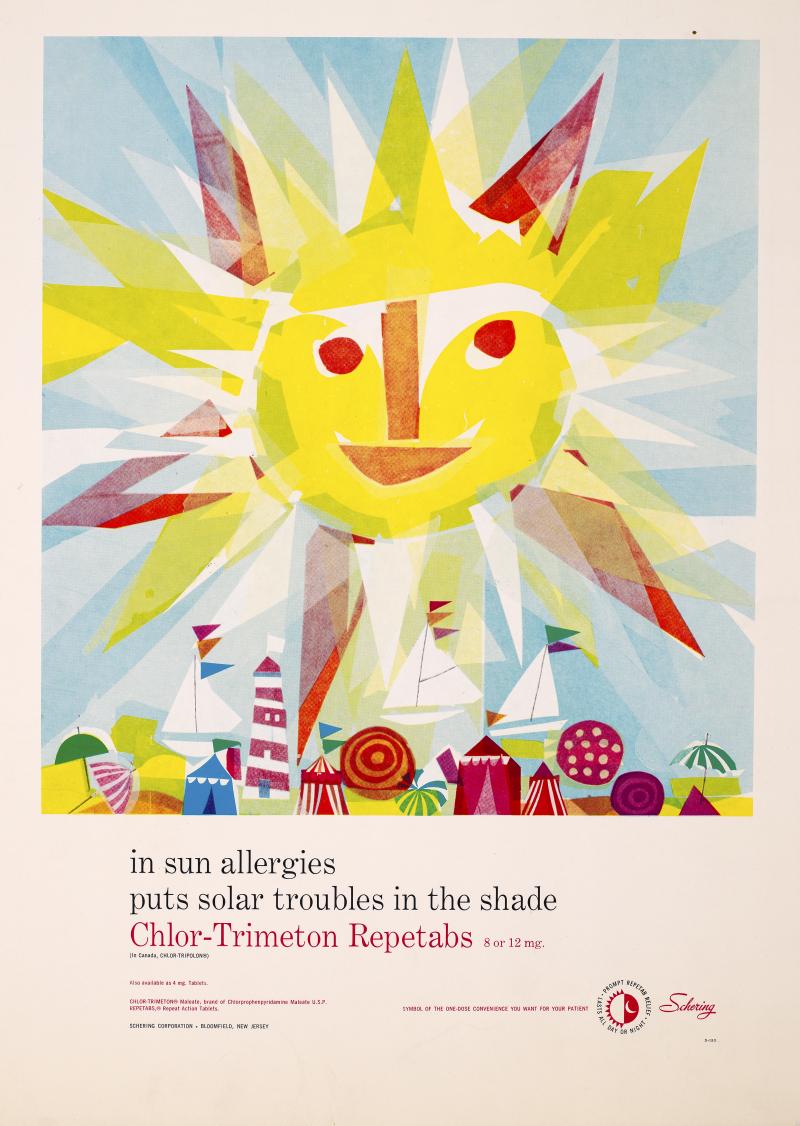 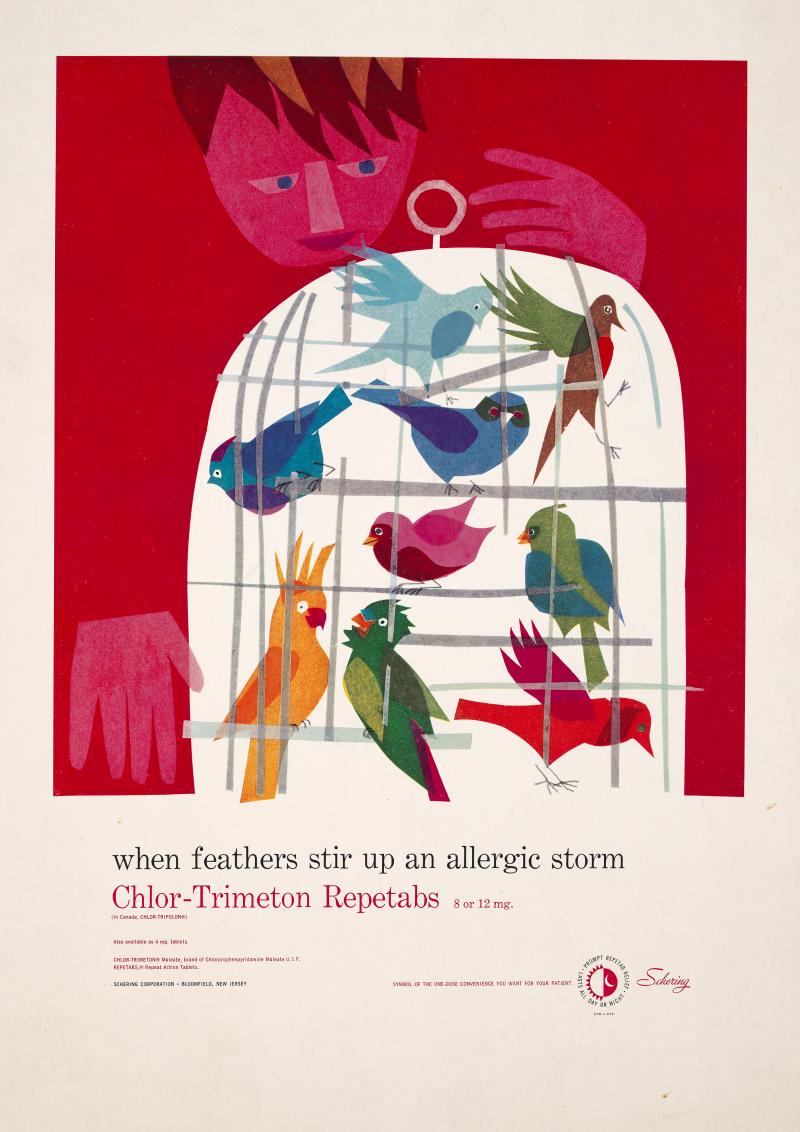 More and more, Carle was given responsibilities beyond design work. He became disillusioned with corporate life, realizing he “simply wanted to create pictures.” He quit his job and began freelancing. He designed a folded brochure featuring a blue whale and a ladybug to advertise his graphic design services.