Here in New England, this past weekend’s snow storm was Mother Nature’s way of telling us that spring is still a good ways away (The enormous piles of snow out the window are hard to ignore!). But not all hope is lost! Snow can be fun; you can sled down it, ski on it, snowshoe through it, and why not also use it as a blank canvas for your family’s colorful designs.

We’ve shared how to do winter snow painting before, and to take snow painting a step further, snow stencils may be just the type of project you need to get through these last few weeks of winter. 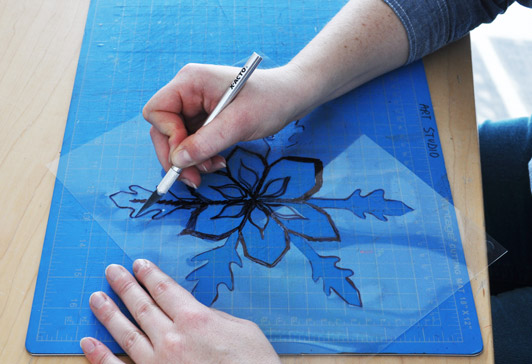 For our stencil designs we made snowflakes, but feel free to use any imagery you like best. After drawing the snowflake design with Sharpies on the transparency film sheet, I used an X-acto knife to cut away certain areas of the image, and leave others behind. Instead of using a sharp X-acto blade, children could cut around the perimeter of their designs with scissors for their stencil. 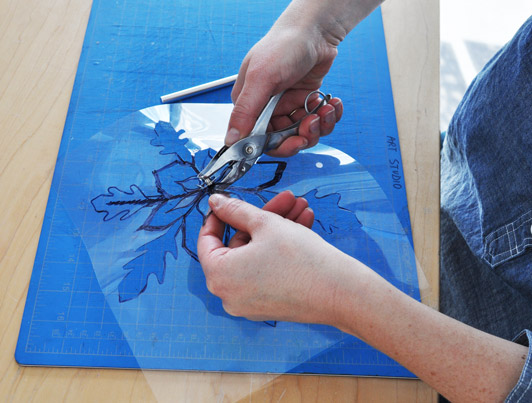 After I cut out areas of the image, I used a paper hole punch to punch some holes out in the film to add extra decoration around the stencil. 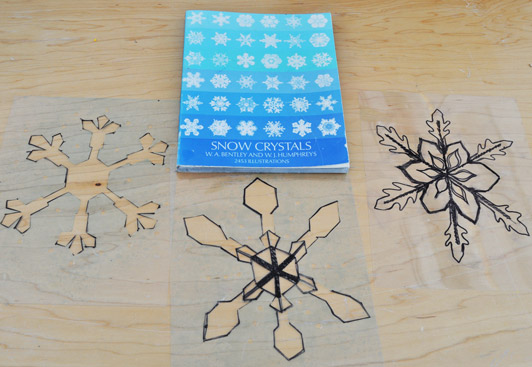 For our snowflake designs we took inspiration from W.A. Bentley’s Snow Crystals. The book is full of photos of hundreds of real snowflakes Bentley photographed over the course of his career documenting the formation of ice crystals. 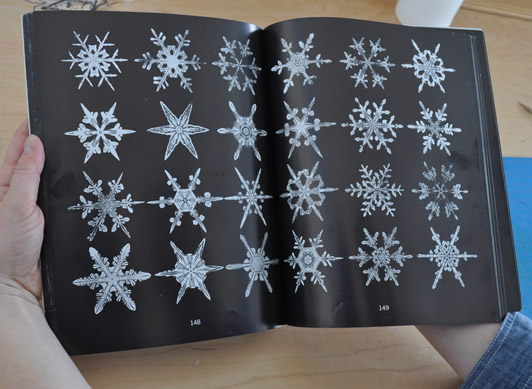 If you are going to make snowflake stencils too, just remember that snowflakes naturally have six points! 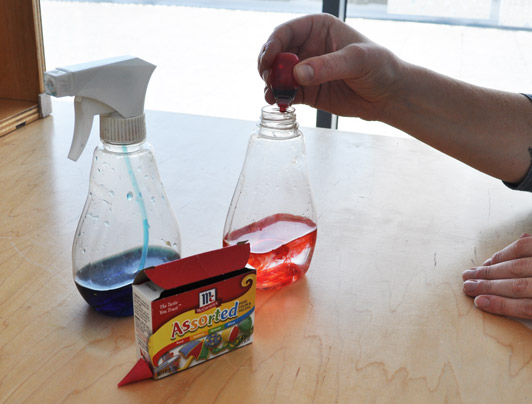 After preparing your stencils, you need to prepare your colored water.  Simply add food coloring to the water in a spray bottle (or follow Sarah’s tutorial on how to use old markers to make colored water).  I didn’t fill up my bottles too much because I wanted my colors to be darker. The more water you add, the more muted your colors will be, and the more food coloring you’ll need. 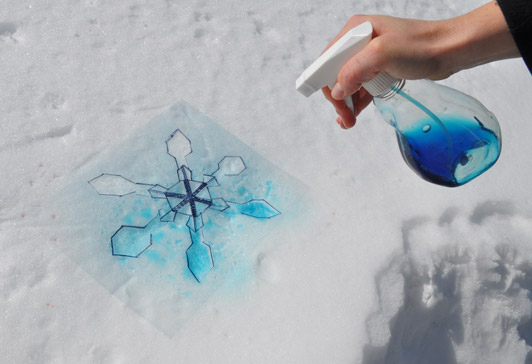 So we bundled up and headed outside on a cold sunny day last week to test them out! 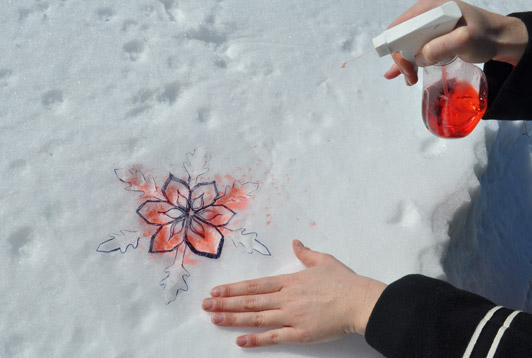 If it’s a windy day use your free hand or have a friend help you hold down the stencil while you spray so it doesn’t blow away. 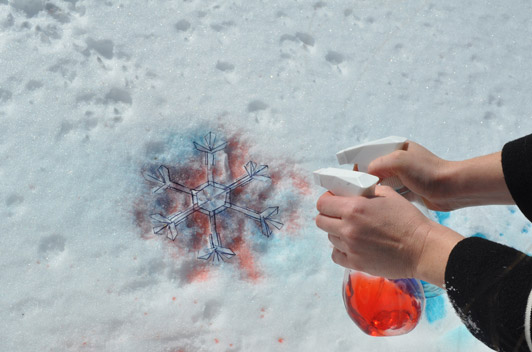 I was a little surprised that it actually worked! The snow held more details in our designs than I thought it would. If your spray bottle has “spray” or “stream” setting I recommend using the “spray” option and holding it about 1-foot above your stencil so you get a soft, even mist that sits on the snow’s surface.  The “stream” setting on my bottle was actually so powerful it melted the color down into the snow and looked more muddled. 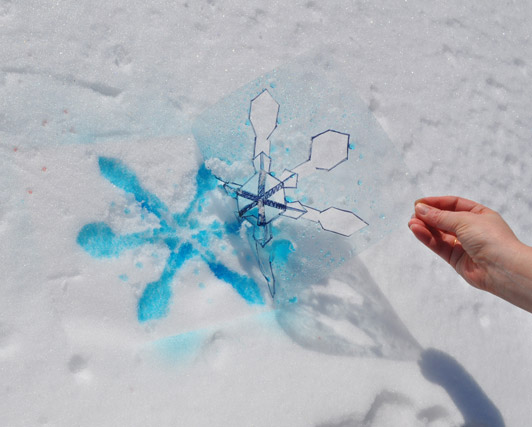 Gently peel away the stencil to reveal the design below. If you leave the stencil on for too long, it might bring some of the top layer of snow with it, so work quickly! 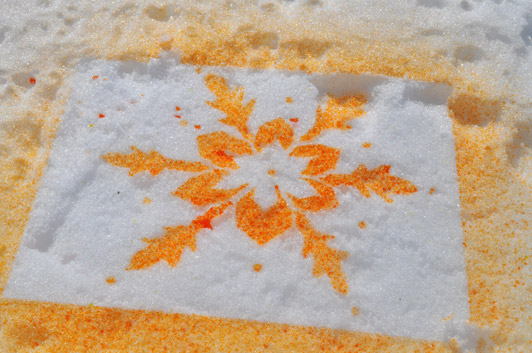 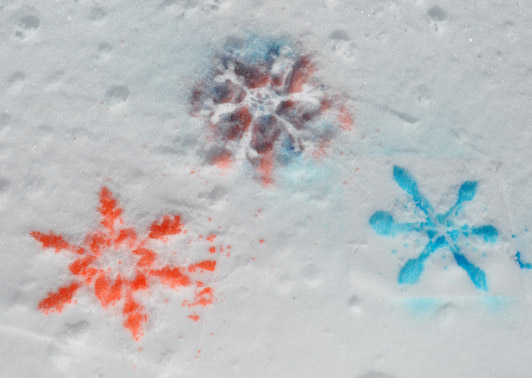 With just the 4-pack of food coloring and 4 stencils the outcome was really colorful and exciting!  The transparency film is great because you can shake off the excess snow and reuse the stencil over and over again. 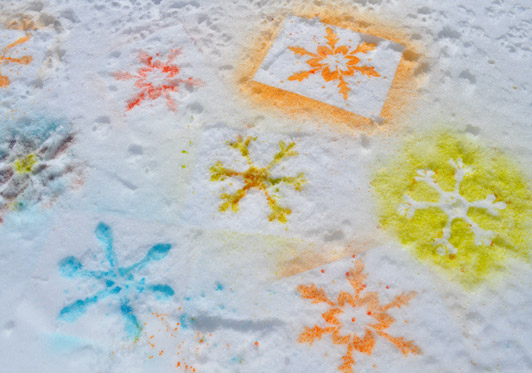 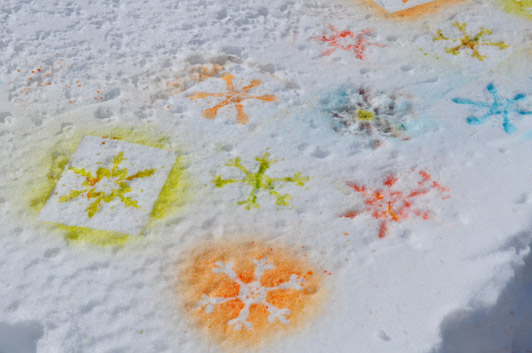 The photo below is a row of hearts I stenciled along The Studio’s patio after our most recent storm. If someone in your family has a late-winter birthday, surprise them with a special snowy message! 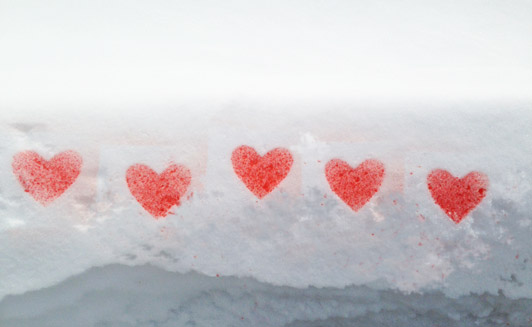 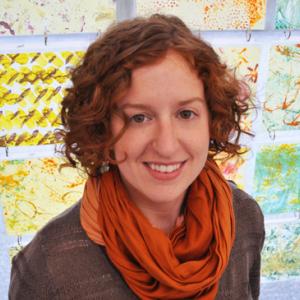 Public Art Program Educator from 2007-2016, Diana has a BFA in Printmaking from Syracuse University and creates mixed-media works inspired by her travels, combining her interests in printmaking and sculpture. She received her M.A.T. from Mount Holyoke College in June 2017, and continues teaching visual arts to children and adults.